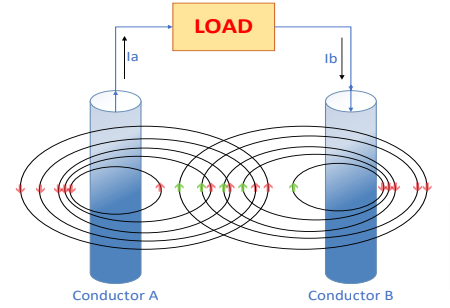 In an earlier tutorials, I have described the most crucial effects in power system.

So, in this post, we are going to study about the proximity effect with the help of diagram.

What is proximity effect in power system?

If two conductors (i.e. A and B) are placed nearer to each other the current flowing in conductor ‘A’ produces magnetic flux linkage with conductor ‘B’. It gives rise to the flow of uneven current through the conductor results in an increase in the effective resistance of the conductor. This phenomenon is called as ‘Proximity effect‘.

Figure 1: Magnetic field around the conductor

Figure 2, gives the correct picture of the strength of the current flowing through each side of the conductor.

Due to this non-uniformity, the current through a particular conductor gets disturbed. So, the effective area of the current path decreases, and hence the resistance in AC is more compare to the DC system.

The proximity effect also depends on frequency (f), relative permeability (μr), the distance between the conductor (d) and the conductivity (σ).

The proximity effect in power system is more in underground cable as compared to the overhead transmission line as the distance between the conductors in the underground line is minimum.

Due to this effect, the insulation requirements in AC are more than DC System.

This is all about the proximity effect. If you have any queries or doubts, you can ask me in the below comment section.

I completed a master’s in power system from NIT, Surat. I’ve qualified for the GATE exam two times. I like to share the knowledge and content about electrical engineering.