In this article, we are studying the fundamentals of Electric Fuse. It is switchgear protection equipment that we use daily even at our house.

Fuse is a protector and safety device for power circuits. It helps to protect from fault conditions such as short circuits, overload, damaged equipment, or mismatched load conditions.

We will see in detail.

What is an Electric Fuse?

A small piece of wire or thin metallic strips of electrical equipment that protect the electrical circuit or system from the excessive flowing current is called Electric Fuse.

In 1890, the first electric fuse is invented by Thomas Alva Edison.

An electrical fuse works based on thermal properties such as the temperature heating effect which is generated by the electrical energy.

A fuse consists of two conducting elements such as short wire and thin metallic strips. These elements are made by a metal conductors like copper, silver, aluminum, and zinc.

Generally, a low melting point and high conductivity material are mostly used in the fuse.

It plays both protector and safety device roles for the protection of the power system. It helps to clear the automatic fault and to avoid damage to electric devices.

By IES, IEEE/ ANSI standard, the fuse has represented by different symbols.

Why is fuse mostly used in an electrical circuit?

What are the types of fuse?

An electric fuse is classified based on the current and voltage rating, carrying capacity, and overcurrent breaking capacity.

Based on the different types of current, there are two types of fuse.

Again, the AC fuse is classified into two different parts- 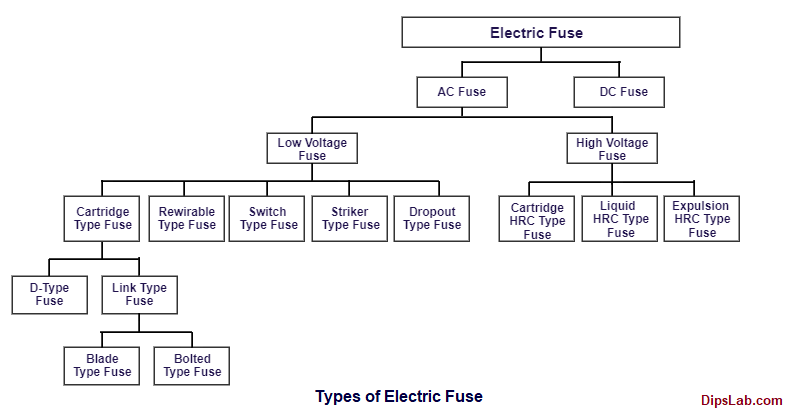 These different types of fuses are designed with a specific perspective, current, and voltage rating capacity.

You can get these types of fuse easily in a market. They don’t have much cost.

How does Electrical Fuse Work?

What is the working of Electrical Fuse?

An electrical fuse works based on the heating effect which is produced by electrical energy.

How is the electric fuse connected in the circuit?

In the electrical circuit, the fuse is generally connected in series. (You can read the difference between series and parallel circuits.)

At the normal condition, the fuse carries the current at normal temperature without overheating effect.

In a short circuit or overload condition, when excessive current flows through an electric circuit (beyond its rated current carrying capacity), a high temperature will generate.

Due to raising the temperature, the fuse element will melt and disconnect the power circuit.

Hence, the fuse helps to provide protection for the circuit and other connected devices.

What is Fusing Current?

The minimum current at which fuse element melts, disconnects and protects the device from fault is called as ‘Fusing Current’.

It depends upon various factors like- fuse elements (wire or strip) material, dimensions, types, and other things.

Use of Electrical Fuse | Applications

What is the usage of fuse?

Overall, it is used for overload or short circuit protection in the power system.

There are many protection devices in the market. I am explaining the multiple advantages and disadvantages of Electric fuse over other circuits breakers.

This is all detail about the Electric Fuse. If you have any queries about the electric fuse, you can freely comment in the given comment section.