In an electrical and electronic circuit, multiple electronic devices are used or connected in the form of energy source and load.

These devices help to build an electrical circuit. And it completes the current path for generating electricity.

Let’s study an electrical source and load in detail.

What is Electrical Sources?

The source which generates the electrical power or energy is called as ‘Electrical Source’.

It produces electrical energy in the form of electric current and voltage.

What are the different types of Electrical Sources?

The voltage source is also classified into two sub-categories.

The current source is also classified into two sub-categories.

Here is explaining the classification of electrical sources one by one.

What is the Voltage Source?

The device or source which generates and maintains potential energy is called as ‘Voltage Source’.

The symbolic representation of the voltage source is-

The ideal voltage source is known as ‘an Independent Voltage Source’. Because, it provides a constant terminal voltage across any variation of load.

Calculation of Ideal Voltage Source: The value of an ideal voltage source calculate by the following formula.

Calculation of Practical Voltage Source: The value of practical voltage source calculate by the following formula.

What is the Current Source?

The device or source which generates charge particles or electric current is called as ‘Current Source’.

The symbolic representation of the current source is-

The source which provides a constant current to the load by changing the across load voltage (Vl) or load resistance (Rl) this source is known as ‘Ideal Current Source’.

Calculation of Ideal Current Source: The value of an ideal current source calculate by the following formula.

In the practical study, the source current is not getting the same load current due to the different load or variable resistance.

Calculation of Practical Current Source: The value of practical current source calculate by the following formula.

This is the explanation of current and voltage (an ideal and practical) source.

What is an Electrical Load?

The electrical load is used to transform and store energy to other applications.

It is classified into different types like inductive, resistive or capacitive in the form of the various electrical and electronic applications. For example, Motors, Lamp or light, Heater, etc.

With load and without load condition:

Basically, an electrical circuit elements are classified into different types.

We will learn each part of the circuit elements with an example.

An electrical element which can be having own capability to produce the current in the circuit is called ‘an Active Element’.

It simply called as Electrical Source. This element helps to produce increasing the level of energy in the circuit.

Battery, Generator, Alternator, and other electronic components (LED, Diode, Transistor, Integrated circuit (IC’s), Vacuum tube) these are an example of the active elements.

Note: A circuit having at least a single active element for flowing current and producing voltage.

The elements which can restrict, store and supply the energy to others from the input source is called ‘Passive Element’.

In passive elements that do not produce own their energy.  And it occurs in the form of a Load.

Resistor, Switches, Voltmeter, Ammeter, Transformer, Capacitor and Inductor (coils), these are the example of the Passive element.

In passive circuit does not work due to the absence of power sources. So, it must provide or connect the input source.

A linear element is also called as Ohmic Element. Because, this circuit element follows Ohm’s Law.

A circuit element which gives constant value with respective time while any variation in voltage or current is called as ‘Linear Element’.

It is always a Passive Element and Bilateral Element. Resistance is the best example of the linear element.

A non-linear element is also called as Non-Ohmic Element. Because, it does not follows Ohm’s Law.

A circuit element which does not gives constant value with respective time while any variation in voltage or current is called as ‘Non-linear Element’.

The element which allows the current in only one direction (Uni direction) in the circuit is called ‘Unilateral Element’.

A Diode is the best example of the unilateral element.

The element which used to flow in both directions (forward and reverse direction) in the circuit is called ‘Bilateral Element’.

The Transmission line is the best example of the bilateral element. In the transmission line, AC current can flow in the forward and reverse both directions but the not particular single path.

Classification of the electrical circuit is basically divided into two categorize. It’s naming as,

The circuit consists of various elements in a single path for flowing the same electrical current is known as ‘Series Circuit’.

In the series circuit, the same current flowing through each electrical component (maybe a source or load element).

But, different voltage occurs across each connected component in the circuit.

The number of elements is connected in parallel form in an electrical circuit is called ‘Parallel Circuit’.

The voltage across each element is the same. But they have different currents in it. It having one or more paths for flowing electron with the different values of currents.

The total voltage across the component is,

You can find out the other electrical quantities (like capacitance, inductance, impedance)value in series and parallel circuits.

Related Read: Here, you can learn more about the difference between Series Circuit and Parallel Circuit.

Now, I am explaining the five different (Branch, Node, Junction, Loop, and Mesh) basic concepts of an electrical circuit. 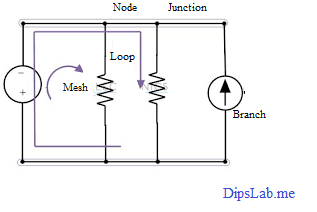 A different path of the circuit which consists of only one circuit element between two terminal is known as ‘Branch’.

From the above figure, voltage source, current source, and resistor are represented single elements in the form of different branches.

A point at which two or more elements are joints together at a single point is called ‘Node’. A node refers to two or more branches.

A point in the circuit at which three or more branches are joint together is called as ‘Junction’. Node gets in the center of the junction.

Note: All junction is a node but all nodes cannot be the junction.

A set of branches which form the closed path in the circuit is called as ‘Loop’.

Mesh is typed of the loop. But loop does not occur in the mesh. All meshes are loops and all loops do not mesh.

So, in this tutorial, I try to cover all sources, load, the circuit element, electrical circuit concept with an examples.

If you have any queries, feel free to write in the comment section below.