Today, I am describing ohm’s law of electricity. It is one of the basic fundamental electrical laws.

Ohm’s law is related to the three basic electrical quantities such as electric current, potential difference (or voltage), and resistance.

To learn about history, who did discover the ohm’s law?

By its name, it’s not really difficult to guess. The ohm’s law was discovered by German physicist scientist Dr. Georg Simon Ohm in 1927.

Let’s start with the beginning.

What is Ohm’s Law?

Ohm’s law is important and essential in every electrical circuit, especially for the Direct Current (DC) circuit.

This law is applicable in case of a good conductor.

Ohm’s law is stated as,

An electric current (I) passes through the conductor are directly proportional to the applied voltage (V) between the two terminal of conductor, if physical conditions remain constant.

This law is obeyed if the physical condition does not change.

How does the current flow in the circuit?

The number of free electrons randomly flows through a conductor. These free electrons collide with each other. The collision process emits its energy in the form of heat.

Here, resistance helps to flow and produce opposition for the collision of electrons. Thus, resistance protects the conductor from the heating effect. 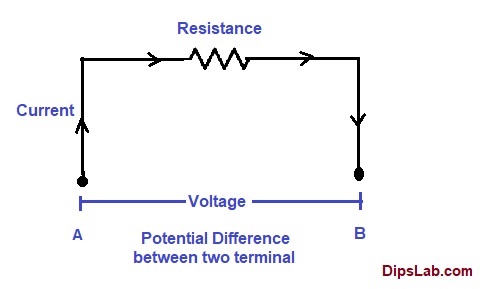 So, resistance is the most important factor for limiting current circulation and protecting the electrical system.

I have explained resistance in detail.

In the general term,

From the following image, you can easily understand.

This means, if the voltage increases, current increases in the electrical circuit.

This is the simple explanation of Ohm’s Law.

You can calculate any one unknown electric quantities  (from electric current, potential difference, and resistance) if the other two are given.

I have created online calculators to calculate these values. You can use them directly.

It is expressed in Ampere (A).

Potential Difference or Voltage is expressed in Volt (V).

Resistance is expressed in ohm (Ω).

Is Ohm’s Law applicable for both AC and DC?

Ohm’s law is only applicable to direct current (DC).

How is Ohm’s Law represented Graphically?

It means that, when low current is flowing through the conductor, higher resistance occurs in the circuit and vice-versa.

In the graphical representation, we are explaining the relationship between electric current, voltage and resistance.

Here is plotting voltage on the x-axis and current on the y-axis of the graph. 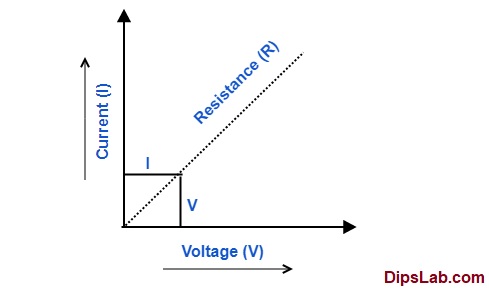 Characteristic of Electric Current (I) and Voltage (V)

What are the Limitations of Ohm’s Law?

There are certain limitations of ohm’s law.

What are the Applications of Ohm’s Law?

There are different applications of ohm’s law.

This is all about ohm’s law statement, explanation, its limitations, and useful applications. If you any queries, you can comment below.

I am coming with another electrical tutorial, soon. Till then, stay tuned!