What do you think about the voltage, potential difference, and EMF?

These are very basic terms in Electrical Engineering. If you understand it properly, it will help you throughout engineering.

In this post, I am explaining voltage, potential difference and electromotive force (EMF). Let’s see if they are the same or different.

In the practically study, voltage is called as pressure (P) or tension (T).

Here is my simplified basic definition of the voltage so that everyone can understand it.

When a potencial is provided through the electrical power source, it pushes electrons easily.  This potencial is called as the Voltage.

The technical definition of the voltage is –

Voltage is the potential energy requires to flow the electric charge (or electrons) in an electrical circuit.

If we talk about electrical equipment, the potential energy is provided in the form of the cell or battery.

The cell or battery is an electronic device that stores chemical energy and transfers into electrical energy.

What is the difference between Cell and Battery?

You can see the block diagram of the energy conversion system below.

Block Diagram for the Battery Conversion

The symbolic representation is different for cell and battery.

Symbolic Representation of Voltage for DC and AC

Voltage is represented by the capital letter V.

The symbolic representation of the direct and alternating current sources are shown in the below diagram.

We can calculate the value of the voltage or potential difference by using the basic formula.

It means that the voltage measured is the electrical potential energy per unit charge.

You can also put it in another format. If you are knowing current and resistance, you can calculate the voltage.

Measurement of the Voltage

The voltage is expressed in Volt.  There are electrical types of equipment to measure the voltage called as Voltmeter or Multimeter.

Why it is called as Volt?

If you look at history, it’s a bit interesting.

In 1745 – 1827, Italian physicist Alessandro Volta has invented the first electrical Voltaic pile battery.  The unit of the voltage-Volt is derived from his name.

To calculate the voltage in any electrical circuit, you have to connect a voltmeter in a parallel position. You can see the following figure where voltmeter is connected across the terminal of the load. 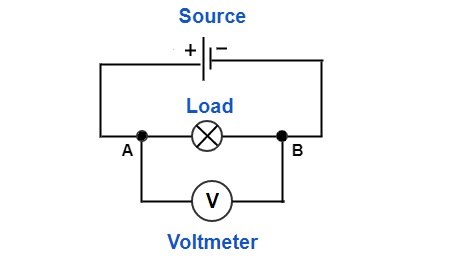 A voltmeter connected in parallel across the load

A voltmeter is just one equipment. There are many Electrical Measuring Instruments you should be knowing.

Here are two basic formulas you can use to calculate the voltage in electrical circuits.

According to Kirchhoff’s Voltage Law (KVL), the different voltage or equivalent voltage can be determined in a circuit.

You can be calculated the value of voltage by using simple online tools.

Now you don’t have to bother about going wrong while doing the mathematical calculations.

This is a simple explanation. I tried to sum up all the basics of the electrical voltage.

Let’s move to our other term- Potential Difference.

What is the Difference between Voltage and Potential Difference?

Voltage and potential difference both are similar for their use of flowing charged particles. But, both works in different aspects.

Potential difference is shortly denoted by the P.D.

Potential difference defines as the potential energy requires to move or transfer the unit of the charge from one place to another in between two terminal of the electrical field.

According to the definition, it is represented as

The S.I. unit of the potential difference and the voltage are the same. Both are measured in voltmeter.

Lets we will study,

How does the potential difference work in the circuit?

In the given diagram, the electric circuit consists of the voltage source (battery) and resistive load.

When the electric current passes through the resistive load, the voltage changes between two terminal.  This changing voltage is called as Voltage Drop.

What is the Difference Between Voltage and EMF (Electromotive Force)?

EMF is nothing but the force. It is another form of energy.

It is shortly abbreviated as the EMF or emf or E.

The electromotive force is defined as the force requires to move charge particles and generate electrical energy from the other power genertaing source.

The EMF is denoted by (cursive letter E) ε. The S.I unit of the EMF is Volt.

The main function of the EMF is to,

This is an explanation about the voltage, potential difference, and electromotive force. Hopefully, you understood it very well now.

If you have any queries, you can freely comment below.

Myself Dipali Chaudhari. I am a master in Electrical Power System. Sharing my knowledge on this blog makes me happy. Apart from that, I love playing badminton. And sometimes I dwell on the Python programming.

Scroll back to top