I will also add functions of each part of the Transformer. So, it will make you understand easily.

What is Electrical Transformer?

The basic definition of a transformer:

An electromagnetic device which is used for step up or step down the voltage level with respect to increasing or decreasing current level at constant frequncy. This device called as Electrical Transformer.

It is also called an electrostatic device because it doesn’t contain removing apart.

It works on a principle of Faraday’s Laws of Electromagnetic induction.  In the transformer, an electrical connection does not occur, but it is magnetically connected.

So, It requires and works only the AC voltage source to generate the magnetic flux in the electromagnetic field. And it is playing a significant role as a protective device by regulating (raising or lowering) voltage in an electrical power system.

The transformer has the main function to transform the power from one circuit to another circuit at a constant frequency. In the transformer, power is measured in the KVA rating, not kW.

The various types of transformers are used in the power system. This classification of the transformer is classified into a different basis.

What is the Construction of the Transformer?

The transformer has made of the laminated iron core and steel strips. It may be ‘E’ type or ‘L’ type shape. The lamination of the core is thin metal strips of insulated metal. This lamination is insulated by a coat of varnish or paper.

It consists of two simple winding such as primary winding and a secondary winding. Those winding are separate and made by an electrical copper coil (number of turns).

This copper coil laminate by the insulating material and wrap around the limb. You can easily understand the following figure.

Internal Structure of the Transformer

AC voltage supply (V1) is provided to the primary winding and load (V2) is connected to the secondary winding.

What are the Main Parts of a Transformer?

Several parts of the transformer are given different function with the works as follow. Let’s study of each part one by one.

A core of the transformer is made up of iron or silicon steel or ferromagnetic materials.

The main function of Core to support the winding and to provide a flux flowing path in the magnetic circuit.

The soft iron core which made by the thin metal strips lamination. Each metal strip has thickness near about the o.5mm. In the below figure, you can see the number of metal strips connected to each other with the lamination layer and form a single core.

It provides a low reluctance path and high permeability for the flux in the magnetic circuit. And this lamination of the core helps to reduce the eddy current loss and hysteresis loss.

2. The winding of the Transformer

The transformer winding is consists of several turns of the copper coil. It is wrapped around the limb or core with the lamination. These windings laminated by the insulation coating because it prevents the short circuit condition.

The winding of the transformer is separated by the primary side and secondary side.

On the bases of supply two types as

Simply two types of winding are used as

I. Concentric types of Winding:

Concentric types of windings are generally used in core types of transformer. It contains the only single path for mutual flux (Φ).  And theses flowing flux are equally distributed on the side limbs of the core.

The single flux path is shown in the following figure.

In these core types of the transformer, windings are surrounded by the core. So, it requires a huge amount of copper coil and laminated materials.

II. Sandwich types of the Winding:

Sandwich types of winding are used in shell types winding. In shell-type winding, the primary and secondary winding is placed on the central limb. 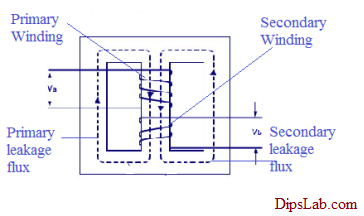 You can see the above diagram, in shell types of the transformer, the core surround by the winding.

Tap changer to regulate supply voltage or load and maintain both conditions by changing the variable turn.

The tap changer is easily removed the first turn and connect the next turn ratio. Tap changers can occur on the primary side or secondary side.

Generally, tap changer use in the high voltage winding side because it reduces load current.

It is classified into two following category,

The transformer tank is needed to store the oil especially mineral oil. This oil provides insulation and cooling to the transformer winding.

The oil conservator tank looks like a rectangular tank. It stores the extra oil and directly connected with the transformer tank.

The oil conservator tank is played an important role in the transformer.

The purpose of the conservator tank is to protect the expansion of oil in the main tank of the transformer. The oil is used in the transformer two purposes-

When the oil level reduces due to losses or leakage, the conservator will be delivering oil to the transformer. Thus, It acts as reservoir oil.

Breather is connected with the conservator tank. It is a cylindrical vessel which filled blue color silica gel.

They have two purposes -remove the moisture from the air and to have the capacity to absorb the moisture in a transformer.

It plays a role to act as the air filter and provide the free moisturizing air to the conservator tank.

Buchholz relay is a protective device that is oil and gas-operated the relay. It is connected to the main transformer tank and conservator tank.

When the internal fault occurs in the transformer due to leakage flux, insulation core, core connection, breakdown core, etc. by producing excess heat.

This excess heat decomposes oil in the transformer and gas bubbles formed. Gas bubbles flow in the upward direction to the conservator and collected in the relay.

Buchholz relay is a fault detected by the amount of nature of gas and oil level in a transformer.

During several fault conditions, an alarm is alert then this command send to the circuit breaker and isolates the transformer. 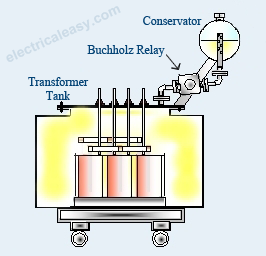 The bushing is an insulating device that is made up of porcelain materials. The terminal of the bushing is provided a path of the conductor to the transformer tank.

With the help of the terminal, the transformer gives and provides the supply to another system. 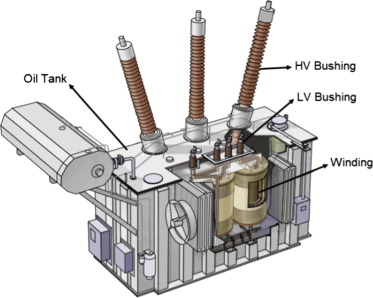 Bushing Of the Transformer (Source)

The cooling tube is necessary for maintaining the temperature and circulating cooling oil in the transformer.

And the radiator is connected with the transformer tank. It is also made of a number of metal strips or pipes.

It is divided into two types of cooling systems.

The explosion vent is located at the topmost position on the transformer.  The conservator tank is directly connected to the explosion tank with the help of a pipe.

The main purpose to prevent damage transformer oil tank by expelling boiling oil during an internal fault. And it is necessary to remove heated oil (in the form of gas) in the transformer.

This explosion tank use only for emergency purposes. It mostly works when a breather and Buchholz replay will not doing work properly.

These eleven main important parts of transformers are covered with the help of the tutorial.

If you are interested more about to learn practically and building projects, here is the listing of the topmost challenging ideas for the Electrical Engineering Project based on Transformer.

Myself Dipali Chaudhari. I am a master in Electrical Power System. Sharing my knowledge on this blog makes me happy. Apart from that, I love playing badminton. And sometimes I dwell on the Python programming.

Scroll back to top